The Latest on the Clashes in the Nagorno-Karabakh Region

Recently, there have been heavy escalations in a frozen conflict in the Caucasus.

Since the 27th of September, the nations of Azerbaijan and Armenia continue to clash over the Nagorno-Karabakh territory, and tensions between the two nations remain extremely volatile.

Nagorno-Karabakh is a historical part of Azerbaijan and Azerbaijanis have lived there for many centuries. However, during Russian invasion there have been a lot of transfers of Armenian families to this region in the 18th and 19th centuries. In the 20th century, both Azerbaijanis and Armenians lived in Nagorno-Karabakh until the dissolution of the Soviet Union. Afterwards, the war had evolved between two countries in the period between 1988-1994, with Armenia having occupied this territory, violating the sovereign rights of the Republic of Azerbaijan. During the war, Armenia committed a massacre in Khodjali- with their soldiers killing 613 civilians in a frosty and snowy February night. A fragile truce was signed in 1994, but the conflict had not ended- continuing over casual confrontations ever since. More than 1 million Azerbaijani people have been displaced from their homes since the start of the conflict.

There have been new political developments which led to a gridlock in the peace process until recent escalations. Armenian PM Nikol Pashinyan began claims that there are 3 sides in this conflict, specifically noting the separated Nagorno-Karabakh regime, insisting Azerbaijan needs to conclude peace with them, and not with Armenia. Azerbaijani president Ilham Aliyev staunchly opposed this proposal and claimed that Nagorno Karabakh is an Azerbaijani territory and they only hold talks with Armenia in this conflict. Furthermore, there has been an inauguration ceremony of the leader of the separatist breakaway province, President Arayik Harutyunyan Shusha, which has been seen as a further provocation towards Azerbaijan. Moreover, separatist regime had started to invite Armenians all over the world to live in this disputed area and Azerbaijan held staunch opposition against these illegal settlements. All of these actions which Armenia undertook are against international law and norms. They continue to ignore peacemakers and other key stakeholders in order to stay in these occupied territories. Obviously, these facts demonstrate that Armenia did not want the peace to prevail in this region, and they are not interested in leaving these occupied territories. There has already been heavy fighting between two sides in July 2020, and after repeated firing upon civilian targets by the Armenian army over the last few months, Azerbaijan has been forced to deliver a decisive counter-attack to free its occupied lands once for all.

International organizations and nearly all states in the world recognize Nagorno-Karabakh as an Azerbaijani territory. No state, not even Armenia recognizes the Nagorno-Karabakh regime as a free state. The UN adopted Resolutions 822, 853, 874, and 884 respectively, demanding immediate withdrawal of Armenian army from Azerbaijan. The OSCE created a Minsk group which was responsible for initiating a peace treaty between two sides. Nonetheless, Armenia was reluctant to leave occupied territories by rejecting all the peace proposals throughout the discussions. We can clearly derive the fact that Armenia is the aggressor and hostile side in this conflict, which has been dragging all the peace discussions to this current impasse. It is important to note that international organizations all failed to act decisively as mediating peace, since there was not an improvement at all in peace talks since 1994. 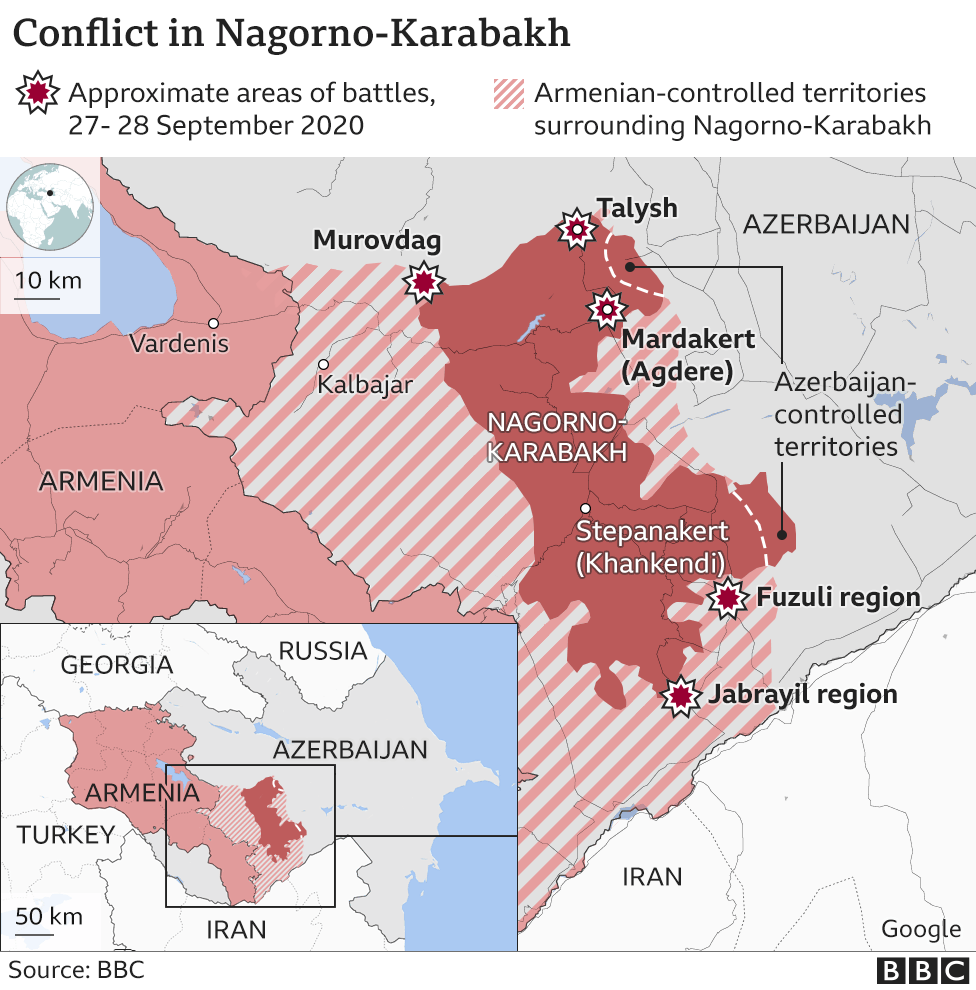 Currently, the battles continue around Fuzuli, Jabrayil, Aghdara, Aghdam region.  Civilians have been targeted by Armenia at other Azerbaijani cities such as Ganja, Kazakh, Barda, Aghdam, Tartar, Naftalan, Goranboy, Fuzuli, Beylagan. Ganja is the second biggest city in Azerbaijan and it is 70 km away from the front, with Armenian fire reported upon civilian buildings, confirmed by Harutyunyan on his official Twitter. As a result of these brutal attacks, 22 people have died and 74 people have been reported with multiple wounds. This amount of civilian casualties is completely inhumane and against the rights layed out within the Geneva convention. On the battlefield, Azerbaijan continues to make advances day by day, and Azerbaijan continues to regain and liberate occupied territories from Armenians, particularly Sugovushan (Magadiz), but also including 14 other regions.

In order to achieve peace in the Nagorno-Karabakh region, the Armenian side needs to take initial steps and put all arm down, leaving Nagorno-Karabakh once and for all. This territory legally belongs to the Republic of Azerbaijan. It is of utter importance to note that the clashes happening are in internationally recognized Azerbaijani territories, and Azerbaijan will continue to defend its civilians, and its national sovereignty, from Armenian aggression.