Grim Clouds Form Over the Skies of Taiwan

While everyone was more occupied with the social, economic and political effects of the Coronavirus…

…China was doing what she does the best – using every little opportunity to her own advantage. In the shadow of the pandemic, Beijing passed a new security law for Hong Kong, making it easier to punish protesters with life sentences under secession, subversion, terrorism and collusion. Not to mention the more and more serious genocide of the Uighurs and numerous border conflicts with India, Indonesia, Vietnam, Japan, and of course, Taiwan.

Even though there is much to discuss when it comes to China’s “gunboat diplomacy” regarding Asia, this short piece only assesses the relationship between the two unruly and very much hateful twins in East Asia region in the last couple of months.

To understand how China sees Taiwan, first it is important to understand how the country perceives itself. China has a historical quest to overcome the shame which was brought onto her by the imperialist countries of the West. To overcome this national humiliation, the Chinese Communist Party, later on just CCP, made a plan consisting of certain stages. Mao’s “The New China” and “Cultural Revolution” referred to the unification of the empire, both geographically and politically. Deng Xiaoping’s “Hide Your Brightness, Bide Your Time” was a very well designed strategy to better the economy and military to Xi Jinping’s “China Dream”. On top of these, a third stage exists, which mixes the national wealth with national power, intending to finish what Mao started all those years ago- the rejuvenation of the Chinese nation by putting the country back to her rightful place above all the other nations. A “Middle Kingdom 2.0”.

Since 1949 the CCP has always wanted to resolve the Taiwan question. Just like all the other leaders before him, Xi knows that the unification of the two countries is a historical quest, but he is the first to have all the means to actually achieve it. In his speech back in 2019 he called Taiwan’s independence a “dead end” and noted that “We (Beijing) will not rule out the use of force (…)”. He then urged Taiwan to follow the Hong Kong model for unification, “one country two systems”.

In The Dragon’s Jaw

So how did China try to undermine Taiwan’s willpower to maintain independence in 2020? When it comes to Beijing’s grasp over Taipei, she uses power on three levels simultaneously. These levels are: coercive diplomacy, disinformation/propaganda, and military power as a tool of deterrence. The most important in the case of Taiwan are the second and third method.

The most common methods of coercive diplomacy used by the CCP are state-issued threats, trade restrictions and tourism restrictions. In 2016 the CCP limited group tours to Taiwan after the election of a pro-independence government led by Tsai Ing-wen. In 2018, the Chinese Government urged the East Asian Olympic Committee to revoke Taiwan’s right to host the East Asian Youth Games, after Taiwan renamed its national sports team from “Chinese Taipei” to “Taiwan” for use in the 2020 Olympics. In 2019, another tourism restriction happened due to the same political factors as in 2016. Finally, in late 2019, the China’s National Film Board ordered its directors and actors to boycott the Taiwanese Golden Horse Award, after a pro-independence acceptance speech from the previous year.

As noted by David Kilcullen in his masterpiece The Dragons and the Snakes, non-state actors learned how to wage a successful war from state actors and vice versa to fight the West. One of the most important lessons learned after Vietnam, but that of which was forgotten to be put to practical use in Iraq and Afghanistan, is that winning the hearts and minds of the enemy is way more important than anything when it comes to irregular warfare. China knows its importance perhaps more than any other country. Certain sources estimate that the size of the Chinese disinformation operation can be over half a million people, which is an incredible number. A fresh report highlights that while this external propaganda efforts have been focused on the cultivation of a positive global impression of Beijing, the promotion of China’s peaceful rise since the 2019 Hong Kong protests and the COVID-19 virus changed drastically, taking on a more coordinated and aggressive tone. As for Taiwan, during the 2020 election the pro-independence presidential candidate had a third opponent: Beijing. The problem is that China’s efforts go far beyond simple disinformation and propaganda. Her goal is to shape the production, dissemination, and consumption of information in Taiwan.

“These efforts foreshadow a sophisticated strategy to influence every stage of the global information supply chain, from the people who produce content to the institutions that publish it and the platforms that deliver it directly to consumers” (Foreign Affairs). 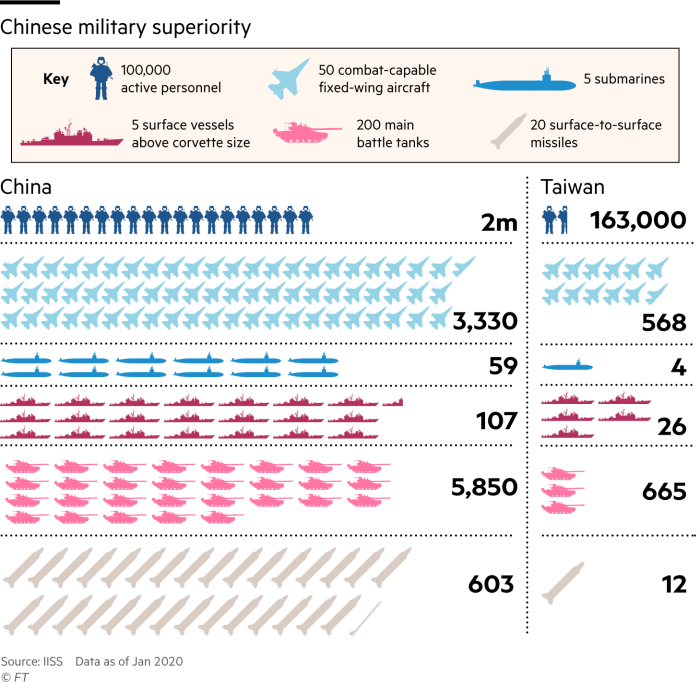 Finally, the most important type of China’s power projection towards Taiwan is the military. The People’s Liberation Army went through a series of improvements in the last two decades, thus becoming the third most powerful army in this short period of time. In 2020 china has conducted several military manoeuvres near Taiwan from February to April, and now during a high profile three day US visit to Taiwan, China crossed the midline of the Taiwan Strait 18 times. Three days later almost 40 Chinese warplanes breached the same line. According to a former top Taiwan military official Beijing’s goal is to provoke a reaction from Taipei with these threats and blame them if something goes wrong. A former US navy admiral highlighted that:

“China’s not getting ready for something [like invasion], it’s conducting military diplomacy by using its military forces to try to make political statements on the one hand, and on the other hand, it is trying to put some more miles on Taiwanese aircraft,”

And these are only the warplanes and warships, I haven’t even introduced the incredible missile threat of the country. After all China has a very rich missile arsenal, with a great number of IRBMs, MRBMs and SRBMs. According to CSIS China has approximately 2200 missiles, all capable of reaching Taiwan.

The diplomatic ties between the two countries have never been good. The two have tried to literally kill each other many times. Unfortunately, China sees Taiwan as one of the last pieces to its long awaited “China Dream” puzzle, and she won’t let it slide away this time. Although the US plans a $7bn arms deal with Taiwan, China has become more and more assertive, it won’t ease the already high tensions we see now, but rather heat it up. So what is the solution? Please stay tuned for the second part of this article in the second edition of Foreign Affairs Bulletin by IDSA.

— Written by Gabor Papp, Political Science major at the University of Szeged  and Associate Editor at FA Bulletin —